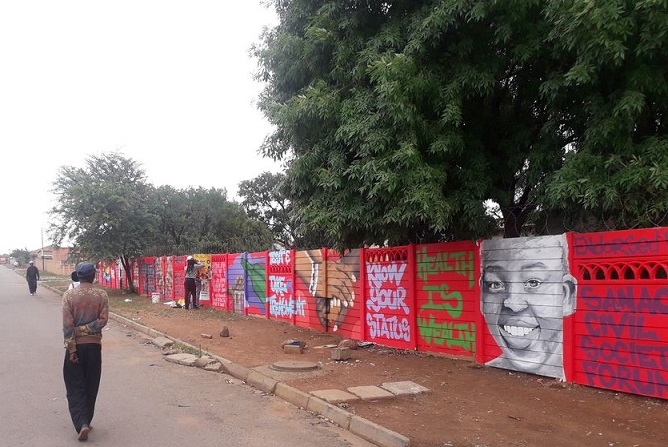 According to a post by Sindiso Ngalo on the group’s official page, Painting Matlosana Red Campaign is an initiative that aims to raise awareness of the status quo and current affairs using art as a medium in Matlosana and surrounding areas.

The project, which was started by Lebogang Moabi and Sindiso Ngalo, was originally named ‘Painting Jouberton Red Campaign’, but was later changed to ‘Painting Matlosana Red Campaign’.

Lebogang said in a post earlier this year that “We noticed the project is growing rapidly and many stakeholders around Matlosana want to join in. We can’t only be focusing on painting Jouberton but we decided to take it to the rest of Matlosana throughout the year.”

This project launched on the 21st of February, but it was decided to make this project a year-long event for 2021.

Ngalo said in the post that the word RED doesn’t mean they use red paint but it’s the enthusiasm, energy and drive behind the project.

Ngalo further said in the post that “Our focus will be mainly on painting murals around Matlosana and its surrounding areas, through the project we aim to raise awareness in Matlosana of the following issues within the community”.

Ngalo said that these issues include:

* Gender-Based Violence (GBV): “Our work will emphasize the stop of gender-based violence by using art as a positive tool.”

* LGBTQI: “We aim to show a positive impact to the community of LGBTQI by doing murals that give them a voice to speak and the power to stand for their rights.”

* Covid – 19: “Our project will be influencing a positive attitude towards following the regulations and safety measures. We’ll also be touching on how it impacted/changed our society and lives.”

* Mental Health: “Depression and other mentally-related illnesses have skyrocketed among society lately and through the project, we’ll be voicing on how to deal with such issues by using art as a coping mechanism.”

* Substance Abuse: “The rise of drug abuse is high among the youth within our communities, and through this initiative, we aim to work hand in hand with our youth, by transferring the skill of painting and include those who show interest to work with us on the project hoping to instil a positive attitude towards life.”

* Human Settlement: “The living spaces within our communities are cramped due to a high birth rate and lack of employment, the recycling companies have become the source of income for many households. This ordeal struck us as Painting Matlosana Red Campaign to portray what our mothers and fathers are going through to ensure a better living.”