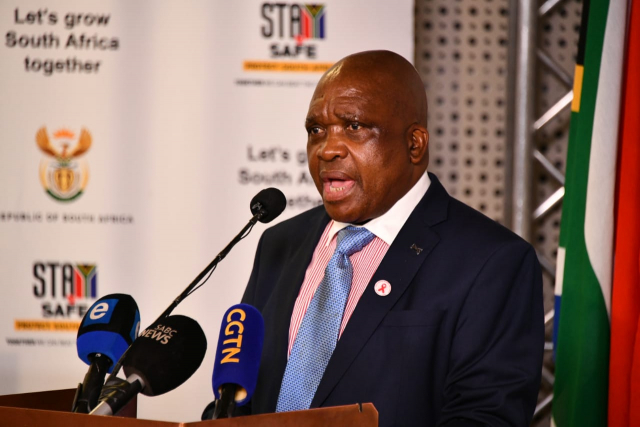 The first case of Monkeypox in South Africa has been confirmed, Health Minister, Dr Joe Phaahla, said during a media briefing in Pretoria on Thursday (23 June).

The patient is a 30-year-old male from Johannesburg, Gauteng, who has no travel history, meaning that this cannot be attributed to having been acquired outside South Africa.

“Late yesterday, I received a report from the National Health Laboratory Services CEO that they have confirmed through laboratory tests the first case of Monkeypox in South Africa. The patient is working with the relevant health authorities and a process of contact tracing has begun,” Phaahla said.

Monkeypox is usually a mild disease manifesting as blisters or lesions on the skin. It is usually mild and self-limiting with a fatality rate of 1%.

The disease has previously been reported in African countries such as Nigeria, Democratic Republic of the Congo, Central African Republic and Ghana in the early 2000s.

The current outbreak is dominated by high numbers in Europe with the UK leading with over 700 cases, Spain with just over 500, followed by Germany, Portugal and France.

Cases have also been reported in the USA and Canada with cases below 200.

The Minister said the National Institute for Communicable Diseases (NICD) is conducting online in-service training for health workers for them to be able to detect the disease so that the necessary laboratory tests can be done.

Minister Phaahla assured South Africans that Monkeypox is not a novel virus which has never been seen before and its characteristics are well known.

Chairperson of the Ministerial Advisory Committee (MAC) on COVID-19 and Executive member of National Health Laboratory Service, Professor Koleka Mlisana, said Monkeypox is a disease that is endemic in Central and Northern Africa which has been known and it’s a mild form of disease.

She said that there are similarities between Monkeypox and Smallpox which have been eradicated.

“There are vaccines and treatment available for Monkeypox. The disease presents itself with flu-like symptoms, followed by the eruption of a blister-like rash on the skin. The important thing is that somebody who comes up with a clinical picture is easy to diagnose and most importantly it is difficult to transmit, unlike a respiratory virus, because it is by contact. You would only get it when you have come in direct contact with somebody who is infected,” she said.

The disease is rarely fatal and cases typically resolve within two to four weeks. Most cases do not require hospital treatment. Prevention of infection hinges on the isolation of cases until fully recovered.

Professor Mlisana said contact tracing is important in this case and the Health Department will continue to do that.

She assured South Africans that the Laboratory infrastructure has all the adequate resources to be able to monitor any new infections that may arise.